One year ago, I got up and drove to my new office, the first home of Radix Financial.  I had two trading screens, a scanner, a coffee pot, and a borrowed folding table.  I had zero clients and no money to manage.  I wanted to try things my way, to do things right, and have the flexibility to help a broader clientele; but I would be lying if I said I wasn’t terrified of failure.

It’s hard not to be sentimental when I reflect back on the last year.  I can honestly say 2015 was the best, most fulfilling year of my life.  So, thank you.  Truly, from the bottom of my heart.

We had a lot of things rock the global markets last year.  Remember the Greek referendum?  Steadily plummeting oil prices?  That horrible morning back in August where the markets opened down 1,000 points?  And the grand finale: the December Fed rate hike, a signal many thought meant we’d finally vanquished the ghosts of 2008-2009.

But that was last month, and 2016 has arrived with its own set of issues.  The three biggies being: a) China, b) oil, and c) valuations.

First, China.  Regardless of the tremendous global economic power China wields as the world’s second largest economy, the last month has proven that the country is still an emerging market, and should continue to be treated as such.  Investors in China, a country still relatively new to the capitalism game, must still begrudgingly accept the occasional violent upward and downward swings.  However, even with slowing annual GDP growth of 6.9% (three-and-a-half times US growth), there are still opportunities for diversified long-term investors as the (previously non-existent) middle-class propels their transition into a consumer-driven economy.

Secondly, oil.  Nothing good here.  The Saudis stubbornly continue to pull out 10 million barrels per day.  A move similar to cutting off their nose to spite their face.  Additionally, what with the Iranian sanctions being lifted and an additional half a million barrels flooding the supply market, there is nothing to indicate a reversal in downward price pressure.  What’s worse, the Saudis have consistently said they would only cut production if Russia does (wildcard), with a similar pledge by Iran (don’t count on it).  Meanwhile, for the few US producers lucky enough to still have the option, they’re faced with the choice to either: a) not drill, and make no money, or b) drill, and lose money.  More supply and less demand from China equals bad news for everyone, EXCEPT the retail consumer, who we hope takes every dollar saved at the pump and dumps it right back into other US produced goods and services.

Thirdly, valuations.  This is more of a cautionary tale.  The table and graph below compare the top three performers of 2015 along with market averages: 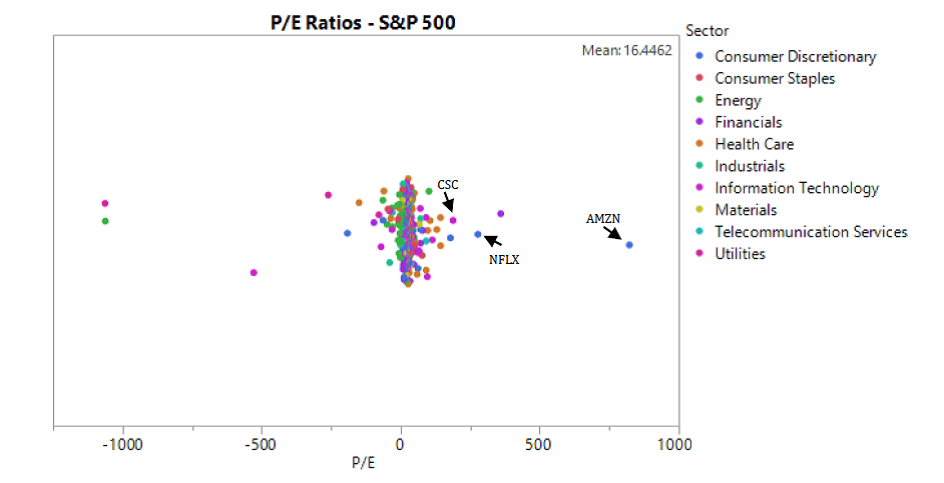 The price/earnings (P/E) ratio is the most basic tool of fundamental analysis and valuation.  Simply, it informs investors how many times the reported earnings per share the stock is currently trading at.  Value investors are looking to buy companies with low P/Es meaning there are positive net earnings, revenue, and sales to justify the price of the investment.  Companies with higher P/E ratios are typically growth stocks with compelling stories investors trust will invest in positive net present value projects, and eventually turn profitable.  As an investment manager, I’m looking at companies that have justifiable P/E ratios and trade in the ballpark with their peers.  Amazon (NYSE: AMZN) is a great example.  Don’t get me wrong, I’m a loyal Prime member, and I love it.  However, when one of the best performing stocks trade at a level that’s more than nine standard deviations away from the mean of the market, and more than 800 times earnings, I worry the markets are trading on something beyond fundamentals.  It’s very reminiscent of the tech bubble of the early 2000's.

We didn’t own Amazon last year, and I don’t imagine we’ll be investing in it during 2016 either, but we are staying invested in high quality American companies, despite the recent volatility.  We invest in companies with strong balance sheets and compelling growth prospects.  Eighty percent of our holdings pay a dividend, most higher than the 10-year US Treasury note.  When we invest, we are looking for tax-efficient, long-term net returns.  ALWAYS.

I’ve said it before, and I’m sure I’ll have to say it many more times, but it’s important not to allow short-term sentiment to derail long-term goals.  While 2016 has certainly gotten off on the wrong foot, remember there is nothing inherently significant about the performance of the first weeks of the year verses any other week.  There’s still 50 more weeks to go, it’s way too early to abandon confidence.

Again, I want to thank you for a wonderful first year.  I look forward to many more!