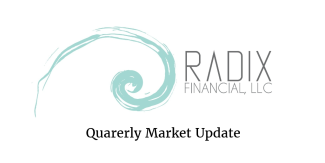 Last Thursday, residents of the UK, in a country wide referendum, voted 52% in favor of leaving the European Union, a so-called “Brexit”.  This largely came as a surprise, as most polls were predicting a victory for the “stay” camp.  Markets hate surprises, and as a result, we saw a global equity sell-off as investors headed for the sidelines.  In the days following, the UK saw the pound plummet; their sovereign debt downgraded; further political instability caused by Prime Minister David Cameron’s announcement to step down; and an overall sentiment of regret.

As the smoke cleared, and investors got their wits about them, markets responded strongly to the upside by coming in and buying on the dip.  And while nobody is quite sure what this decision will ultimately mean for the UK, the EU, banks, or monetary policy; it’s safe to assume the following:

1)  Expect volatility in the coming months;

2)  The Bank of England is willing to do whatever it takes to stabilize the economy, starting with dropping rates;

3)  European banks are going to have a hard time, particularly Italian banks;

4)  The US has the opportunity to benefit from uncertainty in other developed nations;

Overall, S&P 500 companies derive only 2.9% of top line revenue from the UK, a relatively small amount; but the bigger threat may be what impact Brexit has on the rest of the Eurozone.  In the days leading up to the referendum, we reduced exposure to bank stocks and are closely monitoring our international exposure.  For long-term investors, we do not make decisions based on short-term market movements, but we do make tactical moves when we see opportunities. 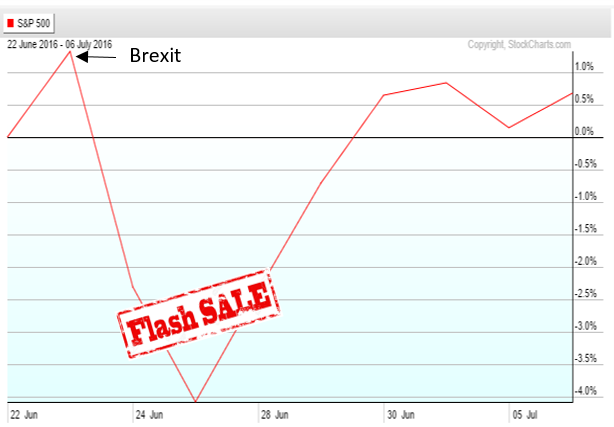 By keeping a level head, we were able to put available cash to work when the market gave us a discount on good companies.  It’s not always that easy, and it’s almost never that quick; but it’s likely that 2016 will continue to give us opportunities as volatility stays high, and investors’ appetite for risk remains fickle.

This week, US Treasury yields hit their lowest levels since…ever.   Normally, a flattening yield curve would be indicative of a recession to come, but in this case, is caused by global investors fleeing Europe and Japan where yields have fallen below zero.  I like to refer to this as “NIRP” (Negative Interest Rate Policy), because it is just a stupid as it sounds.  It’s like lending your neighbor $7, then 20 years later, when you demand your money back, they hand you a $5 bill.

The point of NIRP is to dis-incentivize saving, and encourage spending/lending by penalizing banks for holding any excess cash beyond their reserve requirements.  The goal of this being that all this spending and cheap access to capital (we will literally pay you to take our money) will revive economic conditions and protect against deflation.  What could go wrong?

Meanwhile, the USA looks like a shining star on the horizon with a 1.38% (fully taxable) yield on a 10 year note.  Unfortunately for those looking to reduce risk in their portfolios as they near retirement, it doesn’t look like rates are going up anytime soon.  You’re better off taking your money out of your bank, and buying its stock where you can at least collect a 3% dividend.  Silver lining: if you haven’t refinanced your mortgage in the last five years, the time is now.

Finally, some good news in the Energy sector with domestic crude oil prices rising over 31% during the quarter.  After months of downward volatility, the price has settled just under $50/bbl.  At these levels, domestic producers are cautiously beginning to drill again as illustrated by small weekly upticks in oil rig counts since March.  As production comes online, it is unknown if prices can hold on at these levels given the large supply glut.

Bottom Line: As we head into late summer and fall election cycle, there are likely to be more ups and downs as the market digests the rhetoric.  We are maintaining our long-term strategy, while closely monitoring the news cycle for tactical opportunities as they present themselves.