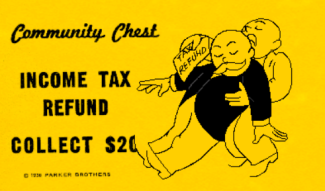 What a year 2017 turned out to be.  The S&P 500 returned over 20%, finishing all 12 months positive, something that has never happened in the history of the US equity markets.  It’s years like 2017 that almost make you forget that investing involves risk.  In fact, all major indices ended the year with positive returns, except commodities, MLPs, and of course, cash.

All successful investors possess a certain unwavering dumb optimism that things can always get better.  We’ve been conditioned to expect that after a big run-up, everything will soon come crashing down, and it’s easy to get caught in the trap of thinking of investing like casino gambling:  that after a certain point, we should take our chips and go home.  If you are a short-term trader, you should.  However, for us, the perpetual optimists, attempting to time a market entrance or exit strategy is foolish, and costly, in both taxes and fees.  Long-term success is only achieved by discipline-- in both good times and bad.

Most things are out of our control when it comes to stock market returns, but good planning, diversification, and asset location strategies give us an advantage.  In December, Washington passed the Tax Cuts and Jobs Act of 2017.  While most of the legislation deals with corporate tax reform, there are many Easter eggs for household level finances as well.

Most Americans will see a reduction in their tax bill for 2018.  Seven regressive tax brackets remain, but where we saw reform and simplification applied to the corporate tax, the individual tax code is further convoluted, albeit a simpler filing process for Americans who claim the standard deduction.  Those married filing jointly, who earn between $240k and $315k a year, will see their tax bracket slide from 33% to 24%.  A huge 9% reduction.  Not so great for many single filers, who will likely see their tax bill increase as they adjust to a very wide 35% income tax bracket.  A chart from our friends at kitces.com is included below illustrating the changes: 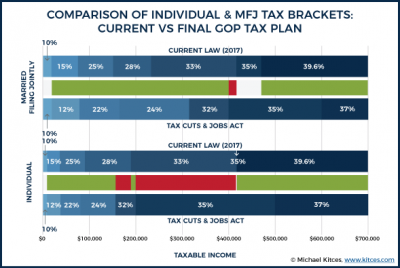 Most of the itemized deductions were retained within the Jobs Act, except some great things like tax preparation and investment advisory fees, but the expansion of the standard deduction means this won’t matter for most anyway.  The standard deduction is being doubled, and the refundable child tax credit has been expanded.  For most, expect to see a bump in your take home pay as updated withholding tables go into effect in February.

One of the more controversial provisions of the Jobs Act is effectively a doubling of the estate tax exemption.  Individuals can now pass $11.2 million (double for married couples) down to their heirs both estate and capital gain tax-free.  However, this provision, like all the individual changes to the tax code, will expire in 2025.  This sunset provision was implemented to pass the legislation with a simple majority, much like the Bush-era tax-cuts.  Here’s where planning gets tough.

Currently, and retained within the new act, is a huge and vastly underappreciated provision that allows for a step-up in basis at the date of someone’s death, regardless of asset value.  That means, that regardless of what the decedent paid for an asset, whether it be stocks, a home, etc., the heirs receive these assets tax-free, at market value, as long as it’s under the current estate tax exemption amount.  What people don’t realize is that you can also give away the same amount, tax-free, as a gift, while you’re still alive; EXCEPT, your heirs will not receive this precious step-up in basis.

Individuals can also give $15,000 to as many other individuals as they wish each year without tax or counting against your lifetime tax-free gift limit.  I call this the “Oprah Rule” because you are able to give away huge amounts of wealth over time by making annual gifts to family members.  Think about it-- Grandpa can give $15,000 to each of his three kids, their spouses, and seven grandkids every year and Grandma can do the same.  These gifts, made of cash or business partnership units, can be made over time with the ultimate goal of lowering Grandpa and Grandma’s gross estate under the exemption amount, so that no estate taxes will have to be paid at death.  Estate taxes are charged at an aggressive 40%, and possibly more, depending on your state (Oklahoma does not currently impose an estate tax).

The tricky part is you don’t want to give away more than the current exemption because you want as many assets as possible to qualify for the step-up in basis at death.  The new law will effectively eliminate the need for estate tax planning for the majority of US households, but the sunset provision is problematic.  Successful estate tax planning often takes a decade to execute perfectly, and without a permanent solution, it remains a gamble as to whether or not to continue lifetime gifting strategies.

These provisions, particularly as they pertain to trust distributions, are incredibly complex and difficult to estimate, so I feel obligated to offer a disclaimer that each situation is different and may require additional expertise from a tax professional, whom I am not.  I am, however, in the driver’s seat for making capital gain recognition decisions within portfolios, decisions which ultimately determine how much tax you pay in a given year; and as a fiduciary, I take that responsibility very seriously.

Income earned from qualified dividends (periodic shareholder distributions from US stocks) and long-term capital gains (proceeds from stock sales that were held at least 1 year), will continue to qualify for preferential tax treatment. This means thatyou still have to pay tax on it, but it’s charged at a lower rate than your ordinary income.  However, in the past, the reduced rate you pay for qualified dividends and long-term capital gains has corresponded directly to which ordinary income tax bracket you fall into.  Well, forget that.

None of this applies to money held within an IRA, Roth IRA, or other tax deferred retirement plan; but it does have important implications for taxable and trust accounts as it pertains to whether your income is retained and paid by a trust or whether it is distributed out to you as K-1 income.  The IRS allows you to make these decisions for the prior year within 65 days of year end, so there is still time to make these decisions as well as make contributions to an IRA for 2017.

Frankly, this is another head scratcher for me.  Under the Jobs Act, funds within a 529 Plan can now be utilized to pay for private secondary education or homeschool expenses up to $10,000 per student each year.  Great, right?  Not really.

Here’s a refresher on 529 Plans:  Funds are contributed on an after-tax basis but are then allowed to grow tax-free and be withdrawn tax-free when utilized specifically for qualified higher education expenses.  If the named beneficiary does not utilize the funds or otherwise receives a scholarship, funds can either be transferred to a sibling or withdrawn, but the growth would be subject to income tax and possibly penalties.

The real benefit is tax-free growth on funds invested early and allowed to compound over a child’s life.  Some states,including Oklahoma, offer a state tax deduction for contributions to the state run plan, but this amount is almost negligible.  If contributed funds are paid out earlier to cover secondary education expenses, it can severely diminishes the long-term compounding power of the account.

That growth comes from the ability of the funds contributed early to grow and compound for a long period of time.  Alternatively, assume that instead of contributing $250 a month, a benevolent grandparent made a one-time gift of $54,000 when the child was born.  Again, invested conservatively and earning an average of 5% a year yields us a total account value of $129,957.44 when the child turns 18.  That’s tax-free investment growth of nearly $76,000!

When you start removing funds earlier, it diminishes the opportunity for tax-free growth within the plan and renders the 529 strategy obsolete.  No doubt that secondary education is expensive, but utilizing 529 plan funds to pay for it does not offer a lot of upside, at least not for Oklahoma residents.  529 plans also have the added drawback of being counted against expected family contribution on the FAFSA student aid form and may disqualify a student from otherwise receiving subsidized loans or scholarships.  A better strategy to consider before even thinking about a 529 plan is to always make sure you’re maxing out your Roth options (IRA and/or 401k).

I hope this has been helpful.  While the provisions are at times confusing, the passage of the Tax Cuts and Jobs Act of 2017 should have a positive effect on household disposable income and corporate earnings.  As we go into 2018, I will likely be reaching out to most of you to request updated income and tax information from 2017 so I can best make investment decisions on your behalf.

As a side note: this January, Radix Financial, celebrates it’s 3rd birthday!  Thank you to all who have contributed to its success! I’m so thankful that you, and your families, have allowed me to be a small part of your family’s continued financial success!