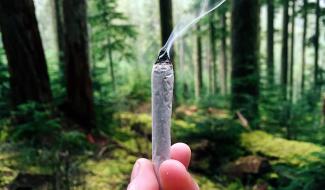 All puns aside, this quarter is the perfect opportunity to explore the cannabis craze from an investment standpoint.  Without getting political, I’ve taken a deep look at the market from a fundamental perspective, and I truly think there is value here.  However, there's a lot of noise in the marketplace right now, lots of “dumb money” pouring into the space, and the brightest red flag of all—lots of money being made quickly.

Last year, I wrote on this blog about cryptocurrencies and Bitcoin, attempting to dissuade potential investors by illustrating the perils of chasing after a trade.  I was right about that.  Two years ago, I opined that Amazon was obscenely overvalued when it was trading at 823x earnings.  Since then it’s returned almost 200% and their earnings have nearly caught up with the price.  Amazon has proved itself to be an exceptionally well-managed company and their investors have been handsomely rewarded for their patience.  Mr. Bezos, you have my apologies and respect.

However, not every company is Amazon, and most investment frenzies do not end well.  Which brings me to 2018’s new bright shiny object—Cannabis.

To establish how large the market for this “new” product might be, we first need to define its potential uses and thereby sales demand.  Cannabis will likely serve as a substitute to products in two major industries, meaning these industries are likely to suffer (decreased demand) from the expanded usage and adoption of cannabis products—if they don’t adapt their product offerings.  Those industries are:

Then, there are the industries in which cannabis can serve as a complementary good and will benefit from the increase in demand:

The applications are growing every day, both medicinally and recreationally, which potentially means new jobs, increased state and federal tax revenues, and a decrease in incarceration costs.  From a purely economic standpoint, the benefits of legalization and decriminalization are both undisputable and substantial.

But what is the demand in a mature market?  Nobody really knows. Projections vary somewhere between $50 billion and $150 billion in a federally legalized environment for the US.  In 2017, the legal cannabis market reached almost $10 billion in sales, with the United States accounting for about 90%, Canada 6%, and the rest of the world at 4%. This represented a 37% increase from 2016.  In 2018, this number is projected to hit $25 billion, due to some key economic behemoths entering the recreational market.  Most notably, Canada, where online sales of recreational cannabis (flower and oils only) begin October 17, and the state of California which officially legalized recreational cannabis as of January 1st of this year but has been slow to broadly implement.

Naturally, investors are pouring in, trying to capitalize on the demand growth.  Since US companies are still deeply constrained by state law and still have no access to traditional means of financing (bank lending), we are getting passed up by our neighbors to the North.

Let’s look briefly at the top cannabis companies in Canada:

Ignore that return column on the far-right, because it doesn't matter.  What I want you to pay attention to here is the cumulative market capitalization of just these five Canadian cannabis companies.  As of today, these five Canadian companies alone account for almost $40 billion in market cap, about half of the global market cap of all cannabis companies…in a market estimated to have 2018 sales of $1.3 billion (remember these companies can’t currently sell to the US).

Even the most aggressive projections of demand growth doesn't come near to supporting that all of these companies will succeed.

It’s a simple horse race—there will be winners and there will be losers.  The problem for investors is that none of these horses have ever raced before, and it’s hard to predict with so much capital being indiscriminately thrown at anything with “cannabis” in the description.

In my opinion, the companies which will ultimately succeed are:

In conclusion, choose wisely when investing in these things.  Actual tangible profits are a long way off, even for the winners. For the losers, there will be nothing left.  Remember that nothing that lasts happens quickly, and these trades belong only in “play money” allocations.  If you can’t afford to lose it, it’s not for you.

I’ve had a lot of fun with this topic, so as always, if you have comments or would like to continue the conversation reach out to me at amy@radixfinancial.com.