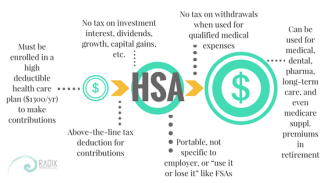 Health Savings Accounts: Fantastic Beasts And Why You Need One

Obamacare is pretty bad - so bad that many Oklahomans saw marketplace premiums go up by 67% this year.  Sadly, the current GOP Senate bill still manages to make this whole mess even worse, if that is even possible.  There is, however, one thing the new bill has going for it that will be great for retirement savers: an increase in the contribution limits for HSAs.

I’m talking about HEALTH SAVINGS ACCOUNTS.  I wrote it in ALL CAPS because it’s important and I want you to read it.  If you follow me on social media, you know I talk about this type of account a lot because it is the only triple-threat retirement savings vehicle.  Your money goes in tax-free, grows tax free, and comes out tax-free (as long as you play by the rules).

Good news is: the 2017 Senate GOP healthcare bill, in its current form, nearly doubles the current contribution limits - increasing them to $6,650 for individuals and $13,300 for families.  Many people mistakenly identify the money going in as “pre-tax money” like with retirement accounts, but that is just #wrong.  The money going in is actually “tax-free money” and excluded from your adjusted gross income as an above-the-line deduction (which also affects your tax bracket, deduction eligibility, and even student loan repayment amount).

Once you’ve made a contribution, there are no restrictions on what you may invest in.  Your custodian or administrator may have a limited selection of investment vehicles from which to choose but, in general it’s your call whether to invest aggressively or conservatively.  Then over time that “tax-free money” you contributed compounds and makes more “tax-free money.”  It’s like the government gave us all a personal offshore lily pad.  Plus, it’s yours, regardless if you change employers or states; and unlike Flex Spending Accounts (FSAs) that are “use it or lose it,” unused HSA moneys can even be passed down to your heirs (note: it is taxable at that point though).

Researchers estimate the average 65-year-old couple retiring today will spend just over $404,000 on healthcare in retirement.  So, while we all would rather think of our retirement savings as going toward a boat, it seems what we’re actually saving for is long-term healthcare.  So we need to start thinking of saving for healthcare and saving for retirement as one in the same.

So, why aren't more people using them?!  Well, in my opinion, we’ve done a poor job educating the public on the benefits, especially as a long-term retirement savings vehicle.  Secondly, many people are hesitant to make the switch to a high deductible plan because they’re behaviorally anchored to a small copay, even though they’re paying a much higher premium every month.  Lastly, the major broker/dealers and custodians have refused to hold them or allow investment advisors (like myself) to manage them on their platform, and get paid for their investment strategies.  So outside of employer-run plans, few individuals participate.

Even though more than 20 million Americans have these accounts, less than 70% are making contributions; and the majority of that money goes in and comes right back out, which is probably why the major investment custodians are wary to hold them.  People seem to be missing the “savings” part of “Health Savings Account.” Even worse, only about 15% of money held in HSAs is invested!  That means the majority of tax-free HSA deposits are earning a negative real return, after inflation.

Take my advice, get setup with an HSA and encourage your employers to provide a high deductible option.  Here is a list of some of the providers out there.  I use HealthSavings Administrators myself, but would be glad to help assist you in choosing the right provider and investment allocation.   Of course, HSAs work best when you’re in a position to pay your deductible out of pocket until retirement, but even if you are in a situation where you need to use that money, you are still easily able to spend “tax-free money” and enjoy lower monthly premiums.  Most plans even provide you a debit card for your account, avoiding the need to reimburse yourself.

…Or you can always keep throwing away your money on higher premiums now and have nothing to show for it later.  By definition, the average insured has a negative rate of return on their premium “investment” anyway.  We know this because insurance companies continue to exist and make money.

Politics aside, I truly believe that a heavier reliance on HSAs by households will force patients to seek out the most affordable options, force providers to be more transparent about how much things cost, and vastly reduce the costly back and forth of insurance filing.  Private insurers would then be able to price premiums at far less oppressive levels, knowing that most routine visits will be paid either out-of-pocket or with HSA funds.  Only time will tell, but with the rapid rising cost of healthcare and our aging population, something will have to be done in the near future to fix the system. And, I’d rather get it right this time.